The company is known for its quality work paving running tracks for high schools and colleges throughout eastern Pennsylvania. Although the area in which Schlouch performs running tracks is fairly consistent with the region in which they perform asphalt paving—which accounts for roughly one-fifth of the company’s annual sales—the company will sometimes travel outside their usual area of operation to pave sport surfaces. 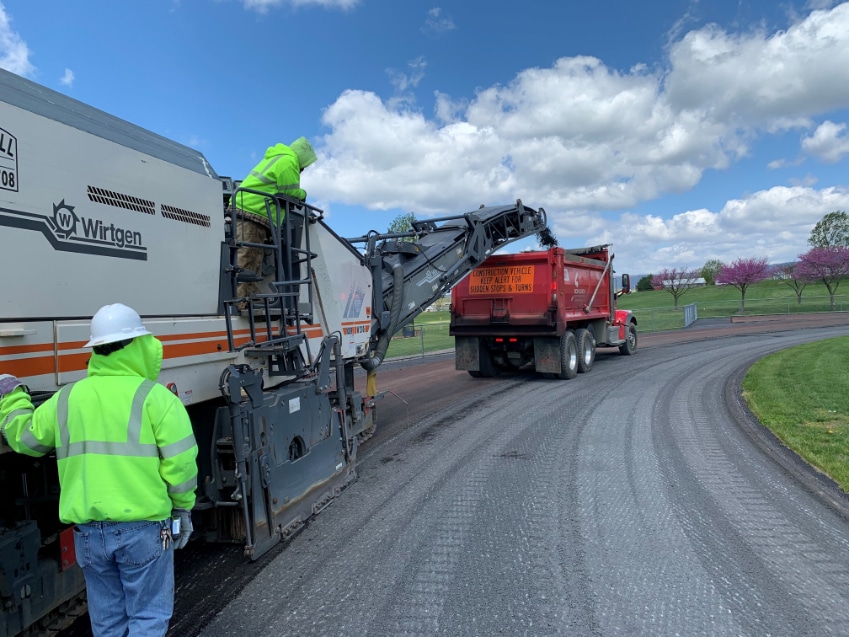 Powell stresses the importance of adhering to tight tolerances when milling out old asphalt, “or you won’t be able to adhere to those tolerances when you put it back in.”

Glen Powell, Schlouch’s paving department coordinator and project manager, estimates the company has paved around 60 running tracks, as well as around 100 sport courts, since it began going after that type of work 20 years ago.

Schlouch Inc. was founded in 1983 by Barry and Deborah Schlouch, who own the company to this day. Today, the company employs 285 people.

John Reinhart, an estimator and project manager for Schlouch, brought the idea of doing sport courts and tracks with him when he joined the company 20 years ago after having experience with these types of jobs at his previous employer.

Reinhart estimates that there are only a handful of contractors in eastern Pennsylvania who pave tracks and sport courts. He explained that such jobs require tight tolerances, and Schlouch employees take pride in delivering a product within those required tolerances.

It’s also a niche market with a tight network of contractors, Powell said, and one heavily based on referrals, Reinhart added. Most of Schlouch’s referrals come from architects the company has worked with in the past and surface coatings contractors, who subcontract the paving portion of the work to Schlouch.

“The reason surfacing contractors stick with us is the quality of the product we turn out,” Powell said. “We turn out quality they can count on. More than anything, that is what’s helped us grow in this niche.” At Schlouch’s most recent running track job, at Bensalem High School, the track was around 15 years old. Although the underlying asphalt was still in good shape, the surface coatings had delaminated from the pavement.

On average, running tracks last anywhere from 10 to 20 years. At Schlouch’s most recent running track job, at Bensalem High School, the track was around 15 years old. Although the underlying asphalt was still in good shape, the surface coatings had delaminated from the pavement.

“With high school tracks, you have tight tolerances because you have to meet certain requirements from the sports’ sanctioning bodies,” Powell said, citing Pennsylvania Interscholastic Athletic Association Inc. (PIAA) or the National Collegiate Athletic Association (NCAA) as examples. “The quality has to be very good because of those tight tolerances.”

Tennis courts and tracks require a slope of ⅛ of an inch per 10 feet, said Schlouch Paving Field Coordinator Rob King. “For context, that means when you put down a 10-foot straightedge after paving, there shouldn’t be any light visible under that straightedge or you’re out of spec,” he added.

To pave running tracks, the Schlouch crew relies on Cat AP-555F pavers equipped with Cat’s Grade and Slope Control System. Schlouch has been using that system on all its jobs since the system was launched, and used Topcon’s Grade + Slope Control System prior to that. In the future, Schlouch plans to get into 3D paving.

“We use Cat’s Grade and Slope Control System while paving and perform spot checks with a laser level and straightedge,” Powell said, adding that they perform surveying work in house to check the layout for tracks. “Being able to check grades across the tracks prior to paving is key, but it’s also important to check grades every step of the way.”

With such tight tolerances, Powell stresses the importance of starting from step one with the end goal in mind. “Whether it’s a new track or a rehab project where the existing pavement is milled out, everything from a quality and tolerance standpoint starts at the beginning,” he said. “You can’t do a lesser quality job in preparation and expect a  quality result from the paving at the end.”

For new track projects, Schlouch uses Cat Grade Control System on its graders. For rehab track projects, the company relies on its milling subcontractor, Rota-Mill, Oley, Pennsylvania. “They do most of our milling,” Reinhart said. “We’ve worked with them a long time.”

How to Surface & Stripe a Pickleball Court

Before milling can be done, the surface coating has to be removed. “The reason the surface has to come off is because the rubber in that coating cannot be recycled at the asphalt plant,” Reinhart said.

That’s exactly what Rota-Mill did when it milled 1.5 inches off the track at Bensalem High School before Schlouch’s crews replaced it with 1.5 inches of new asphalt.

After paving, Powell said, the architect, designer and surfacing contractor typically walk the track to perform a tolerance check. In the case of Bensalem High School, there were no corrective actions to the tolerance.

“The pavement was good to go and move forward with the coating,” Powell said. “We always provide that feedback to the crew who paved the job because they put all the work into it.”

The Bensalem High School track required 450 tons of asphalt. “We also rebuilt the runways in the D zones,” King said, referring to the area between the goal posts and track where events such as the high jump, throwing events, and pole vault take place. King said Schlouch normally uses a 9.5 mm asphalt for its tracks and courts, which are usually 4 inches thick: 2.5 inches of base course and 1.5 inches of wearing course.

King said an average running track is 4 inches thick, usually paved in two lifts: 2.5 inches of base course and 1.5 inches of wearing course. “Some of the tracks are designed as if you’d have tri-axles and tractor trailers driving on them,” he said, adding that it’s common for school maintenance vehicles and utility vehicles to drive on the track, as well as tractors and trucks for events like homecoming.

Schlouch normally uses a 9.5 mm asphalt for its tracks and courts, King said. “And one of the keys is to ensure it’s a virgin mix,” he added. For their region, “[t]he reason for that is if you’re using a mix with RAP, there’s the potential for small pieces of metal to be in it. That metal can rust and come up through the rubberized coating on the surface.” Most of the vendors Schlouch works with do not have magnets where the material is entering the plant process, King added. Although it’s mostly a matter of aesthetics, he said, it could delaminate the coating from the pavement.

Powell said they usually don’t have problems sourcing virgin mix for these jobs within a reasonable distance to the project. However, he added, it is a consideration the company needs to make in the bidding stage.

One challenge Schlouch’s crews often face when paving tracks is access, often a fence with only one entry/exit. In the case of Bensalem High School, the track had only one entry point and was otherwise surrounded by a 30-foot berm.

How to Pave a Tennis Court

The optimal way to pave a track, King added, is to end at the edge of the sprint track. “If you imagine the track as an oval, there’s a section where the 100-meter race is run that extends straight past the radius of the oval,” he said. “That’s usually where you want to finish your pull.”

Powell said the crew is typically matching a concrete curb or drainage system on the inside of the track, which makes paving the curves of the track easier.

In terms of density, Powell said the crew is aiming for the same density as road jobs, between 94 and 96%. However, he added, the compaction process must also factor in tolerances: “As you compact, you have to be very careful you don’t overcompact in some areas to the point that you’re out of that tolerance.”

“That goes for every role on the crew,” King added. “The whole team you assemble for these types of jobs needs to have experience for a job like this to come out to spec.” Glen Powell, Schlouch’s paving department coordinator and project manager, estimates the company has paved around 60 running tracks, including this one at Muhlenberg College, since it began going after that type of work 20 years ago.

Slow and Steady Hits the Spec

“To be competitive in paving, you often have to pave fast and look for high production,” Powell said. “But paving tracks is the complete opposite. You can’t bid on a running track like highway paving.” He estimates they’re paving at about 20% of the speed they’d usually pave on a highway job.

Often, Powell added, this type of work leads to other maintenance activities at local colleges and schools. “It’s not uncommon that we pave a running track and then get called back to repave the parking lot a year later,” he said. “Good work leads to more work.”

However, he added, “it’s important to remember even though you’re paving on a track, it’s not a race.”