How to Surface & Stripe a Pickleball Court

Pickleball is a rapidly growing sport. With the ability to retrofit pickleball lines on existing sport courts, it’s a simple service to up-sell recreation sites. Here’s how to surface and stripe a pickleball court.

There are more than 2.5 million pickleball players in the United States, according to the Sports & Fitness Industry Association. In fact, pickleball is one of the fastest growing sports in the country. According to the USA Pickleball Association (USAPA), the sport has seen a 650 percent increase in participants in the past six years, mostly among younger players.

The sport has been described as a combination of ping pong, racquetball and tennis, and requires players to use special paddles to hit a wiffle ball over a net in the center of the court. However, pickleball courts are much smaller than a tennis court (though, larger than a ping pong table!).

How to Pave a Tennis Court

The ability to retrofit pickleball lines on existing sport courts makes this a simple service when making that sale to residential managers upgrading recreational sites.

Here, AsphaltPro explains the best practices of how to surface and stripe a pickleball court with help from Jeff Gearheart, director of SportMaster Sport Surfaces, Sandusky, Ohio. 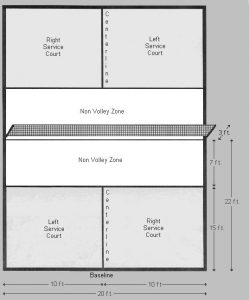 If you are constructing a pickleball court from start to finish, one of the first considerations will be the size and layout of the court.
Pickleball courts measure 44 feet long and 20 feet wide, including the court’s boundary lines. The USAPA Rule Book recommends a minimum total playing surface of 30 by 60 feet, though 34 by 64 feet is preferred. Anytime multiple courts will be in close proximity, fencing between the courts is important to protect players on other courts.

Just as with other sport courts, it is ideal to orient the court north-south to limit the sun obstructing players’ vision and the impact of shadows on the court surface.

This article does not set out to explain how to pave a pickleball court. For that, it’s ideal to follow the best practices of paving tennis courts or other sport courts, taking special care to ensure proper drainage.

For a more detailed overview of the pickleball construction process, check out “Pickleball Courts: A Construction & Maintenance Manual” from the American Sports Builders Association and the USAPA. The 108-page manual offers design, construction and maintenance instructions and is available at the USAPA store.

Gearheart first recommends checking the overall condition of the surface for any cracks, low spots or other deficiencies. Cracks should be sealed and low spots should be leveled before you proceed.

“Courts are normally built with a 1 percent slope for drainage, but water will collect in any bird baths,” Gearheart said. “Not only will the standing water break down the acrylic and pavement, but players will also have to wait longer before than can play after rain.”

One leveling option is SportMaster’s acrylic patch binder, which is an acrylic liquid mixed with Portland cement and sand. It can be poured in low spots and then scraped even with a screed or straight edge. Once it sets up, it can be sanded down as needed. The pavement should also be clean and dry. If not, the coatings may not adhere properly. Gearheart recommends brooming, blowing or power washing the surface to ensure it is free of dirt and debris. “The best option is to power wash the surface, but if it is visibly clean, brooming or blowing should be enough,” he added. He also recommends trimming any grass that may be sticking over edge of the pavement.

It is also recommended to apply the coatings with ambient temperatures between 60 and 90 degrees Fahrenheit for best results.

The process of surfacing a pickleball court varies, and may include application of a resurfacing material and/or a cushioned material, in addition to paint for color and texture and line-striping the court boundaries. Some jobs, such as repurposing tennis courts for pickleball, may only require line-striping.

Once all pavement distresses have been repaired and the surface has been cleaned, Gearheart first recommends applying an acrylic resurfacer. “It won’t fill cracks, but it will fill any voids in the pavement and it will hide any repairs you’ve made,” he said. “And, most importantly, it sets a nice sandpapery texture that cushion and color can more easily adhere to.”

The acrylic resurfacer is particularly important for courts that intend to add a cushion layer. “Without the resurfacing acrylic, the rubber wants to pile up instead of grabbing onto the texture below,” Gearheart said, “and the rubber in the cushion product will fill the voids so the surface won’t feel as cushioned.”

A cushioned pickleball court is created by applying multiple layers of an acrylic with small rubber granules with a soft rubber squeegee. To ensure even application, Gearheart recommends pouring out the cushion product in relatively small amounts, to prevent piles of rubber at the end of the squeegee pull. After spreading the cushion acrylic, he also recommends being gentle while scraping any high spots.

Most public courts are hard courts, while private and tournament facilities tend to opt for cushioned courts. Gearhart said cushioned pickleball courts tend to be more common than other types of courts, due to their smaller size and the sport’s historical popularity with an older demographic.

The color is typically applied with a minimum of two coats. “Pickleball courts are smaller and are often used for doubles,” Gearheart said, “so there’s more wear because the players are always scuffing the same little boxes. It may be worth adding an extra coat to extend the life of the surface.”

“Tennis facilities prefer a more angular sand because it’ll grab the ball and slow down play,” Gearheart said. “With pickleball, I’ve seen rounder sand so it doesn’t chew the balls up as much.”

Although tennis courts tend to be painted blue or green, the USAPA says pickleball courts can be painted any color as long as it contrasts with the lines of the court. “It seemed in the past that they may have been choosing different colors so they wouldn’t be eclipsed by tennis,” Gearheart said, “but now pickleball is a big sport in its own right.” 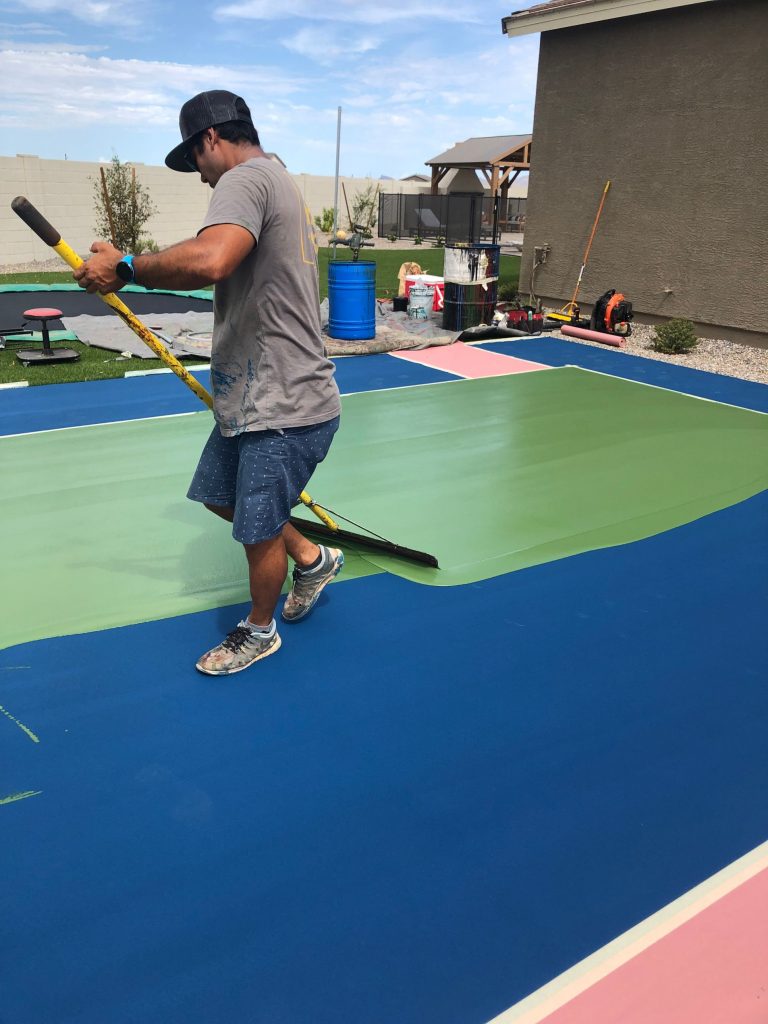 Although tennis courts tend to be painted blue or green, the USAPA says pickleball courts can be painted any color as long as it contrasts with the lines of the court. Photo courtesy of SportMaster Sport Surfaces

“You also want to choose a color that contrasts from the color of the pickleballs,” Gearheart said. Pickleballs are most often yellow, orange or lime green. “Generally, colors opposite from each other improve contrast. For example, if the balls are yellow, paint the court blue.”

Pickleball courts measure 44 feet long and 20 feet wide and are divided into five main areas. See the diagram alongside this article for a visual representation of the dimensions.

Note that the total area of the court includes the boundary lines, so ensure the outer edge of the painted line conforms to the final court dimensions. All boundary lines should be two inches wide.

The USAPA recommends white lines for dedicated pickleball courts, but the most important thing is that the boundary lines are a contrasting color to the court’s surface color. If adding lines to multi-purpose courts, the association recommends lines in the same color family as the court itself. Take care to tape over multi-purpose courts’ existing lines, so they remain the predominant line, and leave a 3-inch gap where any lines intersect.

Straight application of the lines is important, not only for a professional-looking court but also to ensure fair play of the game. The most common application method for pickleball lines is to use a line taping machine and then apply paint with a brush or roller.

“Companies will occasionally use a line striping machine, but overspraying the tape is a common issue,” Gearheart said. Additionally, the traffic paints that can be used in striping machines are often thinner, which means they are more likely to bleed and offer less surface texture and less pigment, resulting in a shorter wear life.

When painting the lines with a brush or roller, Gearheart recommends using a textured white line paint so the lines are a similar texture to the playing surface.

Due to the surface texture, there will be small voids under the tape that paint may bleed into. For perfect lines, Gearheart recommends using a clear-drying anti-bleed primer after taping but before painting the lines. Once the primer is dry, paint the lines.

Allow the paint to dry 24 hours before use. Play on!