Although Superior performs all kinds of paving–and all kinds of construction, for that matter–sport courts are somewhat of a specialty for the company. Superior President Keith Reardon estimates that the company’s project manager, Kevin Murphy, has paved around countless sport courts in his 35 years in the industry.

Located near the popular mid-20th-century resort area of the Catskills, Superior is also in somewhat of a unique situation.

“So many of those hotels, resorts and camps had tennis courts and basketball courts,” Reardon said. Kevin was involved in many of them.

“We have the expertise within our personnel, it’s a part of our history and it’s a profitable market because it isn’t easy and not everyone can do it,” Reardon said. “Most paving contractors advertise that they do tennis courts, but that’s usually not the case–at least with any great success. Experience paving sport courts is critical.”

You’re Only As Good As Your Last Game 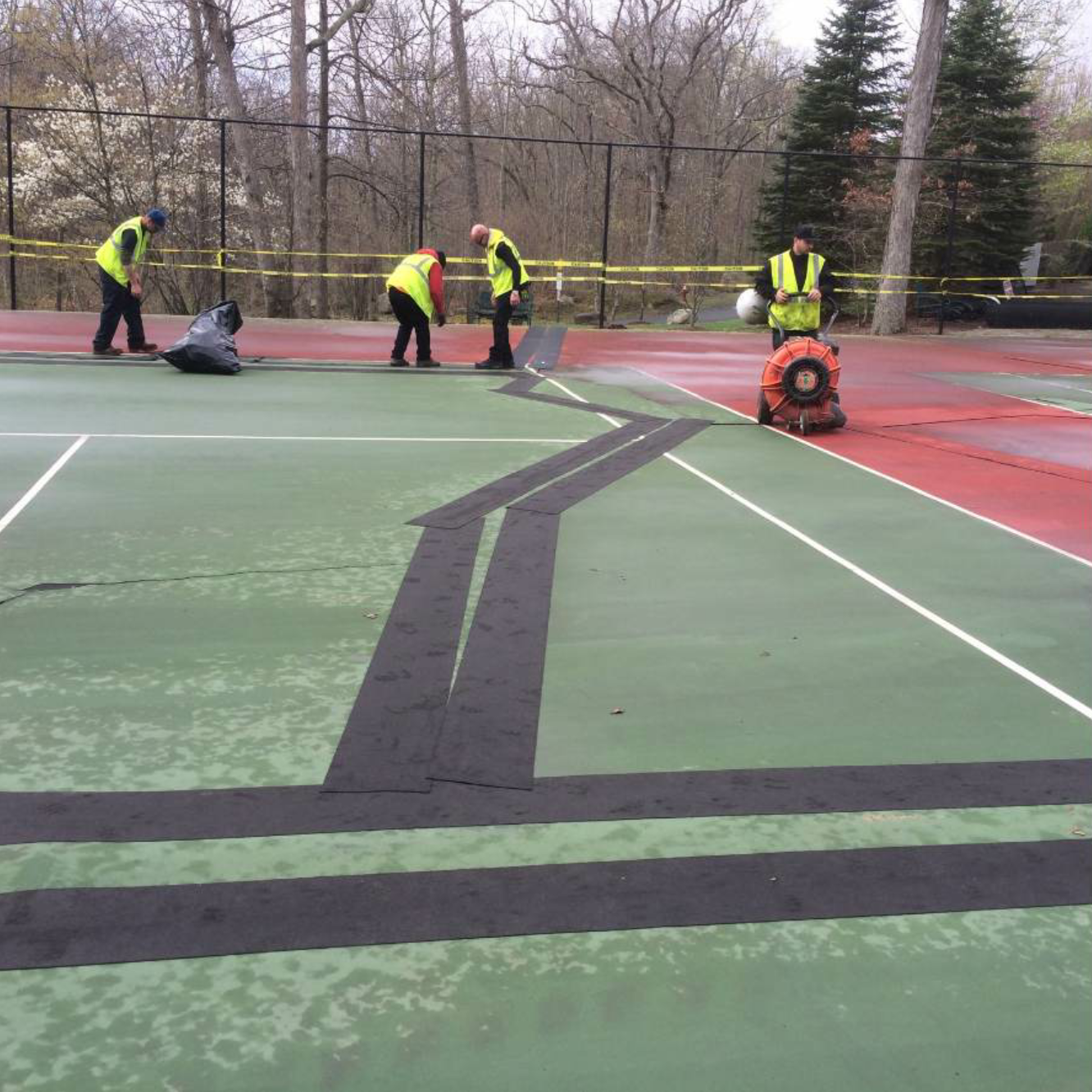 The project in Tuxedo included repairs, application of a membrane over all structural cracks, a leveling course and a new surface overlay, as well as color and striping.

Most recently, the Superior crew paved some basketball courts at Sullivan County Community College. The courts were part of a much larger project–nearly all of which was performed by Superior crews–including removing old courts, prepping the site, performing fencing and more.

The $380,000 project began in July of this year and wrapped up in September. The main paving portion of the project involved replacing Sullivan’s tennis facilities with two full-size regulation collegiate basketball courts.

“These old courts were built in the early ’70s and had structural problems from the start,” said Sullivan Athletic Director Chris DePew. “Over time they were used less and less until the mid-’80s when they were completely abandoned.”

In total, the area included two tennis courts, one handball court and a basketball court, near Lazarus Levine Residence Hall, which was built in 2003. At a private residence in Chester, New York, Superior’s crew did a complete reconstruction of a multi-sport court. The project included site work, drainage, subbase, binder and surface course and a personsonalized color system for the homeowner.

“Since the residence hall was so close, we wanted to find a way to fix them up and make it a usable facility for our students,” DePew said. In 2015, the SUNY Sullivan Athletic Department received a $1 million private donation so they set to work.

Despite housing existing courts and requiring slightly less site work than a brand new installation might require, the courts were overgrown, neglected and located in a swampy, wet area of campus.

“That really held us up because we had to go grade and reshape the area so water would stop accumulating and it would dry up so we could get to work,” Reardon said.

Playing By The Rules Although it may sound similar to many other paving applications, sport courts present a unique set of challenges.

Of course, one of the most significant special challenges is following the parameters set in place by sports associations.

According to Reardon, the caliber of competition plays a big role in the precision required.

“For example, if you were paving courts for the U.S. Open, where it’s an extremely competitive event and world class venue, it gets critical,” Reardon said. But, for most projects like community centers, residences and school courts, the rulebook is pretty standard, he adds.

“Once you establish what they are, you know those parameters,” Reardon said. You know the criteria, the size, and all other requirements. “And then it’s repetition.” The association has four divisions (tennis, track, field, and courts and recreation), each of which has its own construction manuals available online at sportsbuilders.org/publications. Tennis guidelines would be available under the tennis division, but basketball–while similar in many ways–is housed under courts and recreation.

ASBA began in 1965 as the U.S. Tennis and Track Builders Association, but then expanded to include artificial turf fields, courts and recreational facilities. In 2004, it changed its name to ASBA. The Maryland-based association has more than 400 member companies across the country.

“You have to pass a test and prove you have enough experience in the field over a certain number of years,” he said. You also have to keep up with the industry and re-certify every three years. “I’d trust someone who paves tennis courts to pave a parking lot, but not vice versa,” Edgerton said. “A lot more goes into the design of the court than you’d think.”

For example, the court should have a 1 percent grade, “no more or a little less,” Edgerton said. “One inch every 10 feet is a good standard.”

But, he adds, it must be pitched in the same plane. For example, you wouldn’t want a court to slope down from the net on both sides.

“That’s just fine if all you care about is it shedding water, but the players will technically be playing uphill the whole time,” he said. “They’ll be serving uphill and the ball will be landing on a downhill slope.”

Pave a Sport Court with Precision

“When it comes to paving courts, there’s special care and precise equipment that goes into it,” Reardon said.

It requires checking once, twice and even three times. It should be checked with a laser and paved with equipment that can hold a precise grade. His own crew uses a Carlson CP-90 paver with automation and Hamm compaction equipment.

Reardon said having equipment equipped with electronics is integral. “You should have a joint matcher and grade controls on your machine, as well as a laser to shoot and check grades,” he said.

The binder course, in particular, is checked and double checked with a laser to give the crew a chance to level any imperfections before placing the surface course.

“You have to be on the high-end side of quality control,” Reardon said. “You have to turn out a really tight, dense, pretty project. Not many people do it very well.”

Beyond getting the grade and slope just right, Reardon said there is also a really high standard regarding segregation.

“You don’t want much stone in the top mix,” he adds.

Superior is often using the same mix on its sport courts as it does on most other projects.

Another unique challenge for many sport courts is access.

“When they’re initially built, they’re tucked into hillsides or on someone’s estate and there isn’t much thought about how crews will get back there to rebuild or repave that court,” Reardon said. “It’s not like a parking lot or a road that’s meant to be driven to/on.”

So, a lot of times, his crew has to build its own access point to the project. “We need to take out landscaping, put a temporary road through someone’s lawn or a park to get our equipment onto the court again, and then restore what we’ve disturbed once we’re done.”

For example, on a recent tennis court project at a private residence, Superior’s crew had to use lighter trucks than usual. So, when Reardon’s team is paving a new court, he tries to keep access in mind.

Another consideration for new courts? The sun.

“You don’t want to put courts east to west because it would be unplayable at sunrise and sunset,” Reardon said. You also don’t want much tree cover because the leaves on the court could collect mildew and create problems.

“We help customers pick out the best spot for the court,” Reardon said. “Sometimes the lay of the land dictates something that isn’t ideal, but we’ll always give our advice.”

Coat it in Team Colors Superior had to perform a lot of grading to improve the courts’ drainage.

“One of the potential problems on finished sport courts is, when the painting crew comes, if the court doesn’t drain properly and there are bird baths, they have to do leveling with leveling compounds and that’s going to make it more expensive,” Reardon said.

In Reardon’s case, it’s also a matter of being a good neighbor. His painting subcontractor, Copeland Coatings, rents the office space next to Superior’s office.

“We used to color our own courts, but we decided it was too time consuming,” Reardon said. “There were too many trips back and forth, coating and curing, coating and curing. I’d rather use those personnel to be out paving somewhere.”

“When it comes to painting, my advice would be to subcontract it to a pro, because that’s the finished product, the icing on the cake,” he added. “That’s what everyone is going to see when they look at the court. You can construct a wonderful court underneath, but if the paint is streaky or there are other cosmetic issues, people will think you’ve done a bad job.”

Copeland Coatings manufactures and distributes acrylic paint throughout the northeast, but they also color running tracks, tennis courts, basketball courts and more. They’ve been making and using their own acrylic since the ’70s. “We coat everything, but we don’t build anything,” Edgerton–Copeland project manager and ASBA Tennis Division president–said. After painting around 300 courts per year throughout the northeast, Edgerton knows a thing or two about proper acrylic application. His top recommendation?

“Have enough crew on hand for the job, because the paint dries really quickly,” he said. For example, if they’re painting one court, the crew may be only two guys, but two courts would require three.

“You have to make sure the stream of material stays at a consistent viscosity while you’re squeegeeing fast enough,” Edgerton said. “You also have to have enough material for the job so you don’t have to stop, which would leave marks.”

It’s also important to remember that the ambient temperature will affect the viscosity of the paint and the finished look of the job. “You also wouldn’t want to paint on days it might rain,” he adds.

Both Edgerton and Reardon have seen a trend towards more unique paint choices over the past few years.

“Years ago, it was either green or red, but now we see purple, gold, blue,” Reardon said. “There’s a lot more personalization with color palettes and logos.”

Edgerton estimates that around 70 percent of the tennis courts he paints these days are U.S. Open colors–blue and green–while basketball court colors run the gamut.

“We do a lot of logos these days that we paint with stencils,” Edgerton said. “It’s a nice little extra to make the court more unique or different.”

After the Game is Won If the old maxim that you’re only as good as your last game is true, Superior Surfacing Systems just might deserve a trophy.

“Superior did an amazing job keeping the impact on campus to a minimum during construction,” DePew said. “The project will have a profound impact on the quality of life of our residential students living less than 50 yards away from the facility.”

Down the road, Superior will be converting the area near the new basketball court into a sand volleyball court, as well as paving new tennis courts for Sullivan.

Let’s just say sport courts will continue to be a winning part of Superior’s business strategy.