The word downtime might as well be a curse word in the asphalt production industry. As any operator can tell you, unplanned plant shutdowns can end up costing a producer hundreds of thousands of dollars in lost production, not to mention a line of unhappy truck drivers and asphalt customers.

The key is to get ahead of the problem and spot issues before they skyrocket in severity. Fortunately, some asphalt plant manufacturers offer plant control add-ons that not only streamline the process and make operators’ lives easier, they also sound the alarm—sometimes literally—on potential problems that could grind production to an abrupt stop if not addressed.

Here are some plant control upgrades, most of which will pay for themselves just by preventing a single unplanned shutdown. Replacing manual switches with a programmable logic controller (PLC)-based HMI control system, is one of the easiest ways to clean a control house, ensure fast troubleshooting and streamline information.

Human Machine Interface (HMI) Controls—Replacing manual switches with a programmable logic controller (PLC)-based HMI control system, such as a monitor and mouse or touchscreen, is one of the easiest ways to clean a control house, ensure fast troubleshooting and streamline information. Asphalt plants often have dozens or even hundreds of switch wires. An HMI can help reduce the number of wires to just a few paired with a communication cable.

This opens the door to more automation within the system, such as automated start-up with a single click, a task that otherwise may have required flipping several switches to complete. More information is also available visually, as any number of readouts can be programmed to display on the HMI.

The change can also assist with reducing downtime. Troubleshooting problems within the control house often requires checking switches then following wires to try to determine the problem. Replacing hundreds of wires with one can cut the time spent figuring out the issue by more than half. This allows operators to quickly fix the problem or place the parts order to reduce downtime. If the operation is paying by the hour for service, a shortened visit also saves money.

In addition, if the system is connected to the internet, some asphalt plant manufacturers offer free remote online troubleshooting. This enables company engineers to log in to provide remote assistance from their office. The feature not only saves time, it can eliminate the cost of a service visit.

There is a misconception that replacing hardwired switches and buttons with monitors and touchscreens leaves operations at the mercy of technology and if an issue occurs, such as a frozen screen or broken communication cable, a full plant shutdown is imminent. That isn’t so. The PLC is usually doing the actual running of the plant in PLC-based HMI control systems, so operators can typically replace a cable or restart the HMI without any interruptions to production. 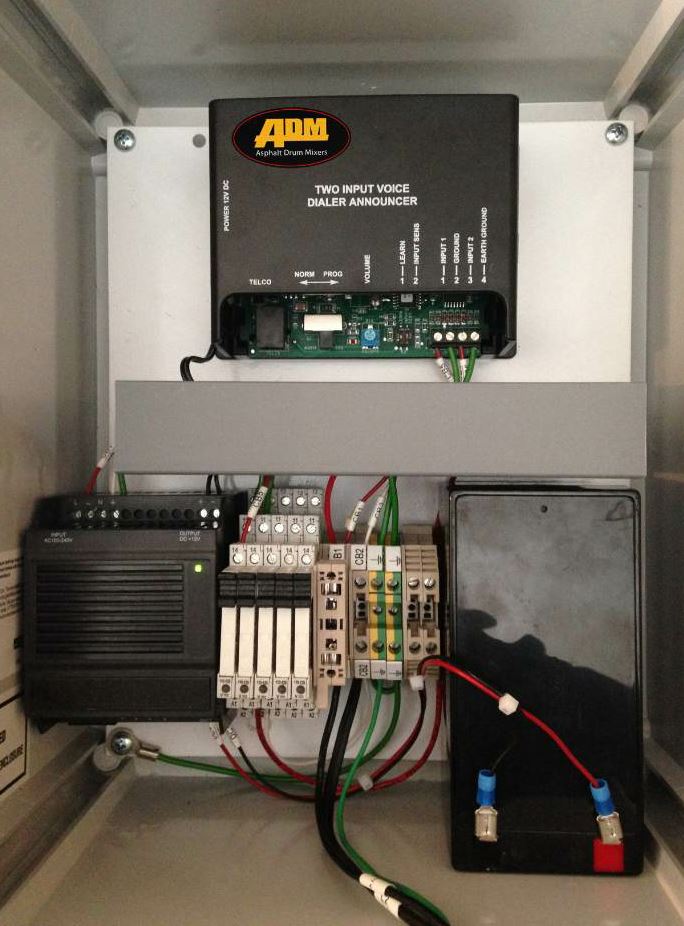 Sometimes called an “alarm box,” “alarm dialer” or “tattle tale,” manufacturers program a call box to notify someone of an event at the plant. While the device can be tied to most systems, operations most often use it to monitor asphalt tank temperature.

Call Box—Sometimes called an “alarm box,” “alarm dialer” or “tattle tale,” manufacturers program a call box to notify someone of an event at the plant. While the device can be tied to most systems, operations most often use it to monitor asphalt tank temperature. A producer can experience significant downtime if an asphalt tank heater fails on a cold evening and the problem isn’t discovered until the next morning. This is because, between correcting the heater problem and bringing the temperature back up, some tanks can take days to reach the temperature where production can resume. The result is thousands of dollars in lost production and wasted money, not to mention unhappy customers and repair costs. If notified immediately of a heater problem or asphalt tank temperature drop, an operation can quickly address the issue—more than paying for the cost of the call box in a single instance of prevented downtime. Operations choose from landline and cell phone call box configurations, with the cell phone version being the most reliable because it is more likely to continue working during a power outage.

A variety of customizations are available, depending on the manufacturer. These can include automated alerts via text messages or phone calls to quickly alert operations to specific problems with other systems, such as power outage status. Operations also choose from landline and cell phone configurations, with the cell phone version being the most reliable because it is more likely to continue working during a power outage. Digitized fuel meters allow operators to see changes in fuel consumption that can help determine if there is a problem at hand, such as needed burner maintenance, greater than normal aggregate moisture content, etc.

Fuel Meter—A digitized fuel meter to measure fuel consumption is another useful add-on that can pay for itself by catching costly problems. Checking the read-out on the side of the fuel tank or from the control house is safer than having a worker stand on top of the tank to use a stick and tape measure to read fuel levels. A sight gauge on a tank’s side can be as fast, but gauges can become dirty or plugged so they aren’t always accurate. A fuel meter, on the other hand, is accurate to a fraction of a gallon.

The benefit of being aware of an operation’s exact fuel consumption is quickly realizing whether the plant is consuming too much or too little fuel. Changes in fuel consumption can help determine if there is a problem at hand, such as needed burner maintenance, greater than normal aggregate moisture content, and high pollution. If not caught quickly, additional harmful pollutants can lead to plant shutdown by the state or local authorities. Too-high fuel use can also affect product quality. If a burner is overloaded with too much fuel, some can get through unburnt and mix in with the asphalt mix. Oftentimes this wouldn’t be noticed immediately. The result could be premature deterioration of a roadway as well as fees and, potentially, an unhappy customer. Used on both asphalt and fuel tanks, a tank level indicator shows how much material is in the tank. The benefit is the ability for the plant operator to see the level from the control room rather than walking out to the tanks to check the levels.

Tank Level Indicator—Tank level meters are another useful device to help prevent costly downtime. They come in a variety of types, including pressure gauges and radar. Used on both asphalt and fuel tanks, the meter shows how much material is in the tank. The benefit is the ability for the plant operator to see the level from the control room rather than walking out to the tanks to check the levels. This is useful on busy days where the operator may not have time to visit the tanks. A shutdown may result if the levels sink too low without the operator noticing and ordering material in time.

Operators should note that, although some storage tanks may have extra ports for installing a tank level meter, it is not always possible without modifying the tank. Always take precautions any time that work is done on a fuel or asphalt storage tank, including emptying and venting the tank to clear it of volatile flammable material. Always work with a tank professional and consult with the tank manufacturer before making any modification to a storage tank.

Amp Meter System—An amp meter system can help catch small problems before they become larger and more costly. The system reads amps on select motors to determine how hard each is working. That information is then usually transmitted to the control house to be viewed on a monitor. Similar to the fuel meter, the amp meter system is useful for noticing changes in consumption from one day to the next. If a motor is suddenly using much more power than it did the day before, there is definitely a problem.

For example, if a drag conveyer that typically uses 75 to 80 amps begins pulling 85 amps, something is wrong with the conveyer. This could be that the motor is having trouble moving material, something is plugged up or paddles are worn. The early warning allows operators to fix or replace parts early before something large breaks and the plant is forced to shut down for a fix. While an operation would likely notice if their electric bill was increasing, the amp meter system can notify maintenance personnel precisely where the issue is occurring, speeding up the troubleshooting process.

Whether it’s for monitoring fuel or power consumption or for quickly notifying an operation of a problem, many plant control house add-ons can more than pay for themselves through prevented downtime and headaches. Work with an asphalt plant manufacturer that is willing to customize add-ons to each specific plant to ensure a high ROI and maximum uptime.

Carlos Cardenas is a sales engineer for Asphalt Drum Mixers Inc., Huntertown, Indiana, with almost 25 years of experience in the service, engineering, and sales of asphalt plants and components. For more information, contact him at (260) 637-5729 or carlos@admasphaltplants.com.