The pavement on a section of Interstate 40 incorporates highly modified asphalt (HiMA) made using Kraton polymers in three different asphalt mixes and lifts. It features enhanced durability with a thinner cross-section of pavement than is typical for Oklahoma interstates. A low viscosity polymer allows the use of 7.5 percent styrene-butadiene-styrene (SBS) polymer.

Let’s take a look at how the pavement has been performing.

The HiMA sections are located from mile marker 102.2 to 104.2 just west of Oklahoma City.
These sections endured an average annual daily traffic (AADT) of 25,300 vehicles, of which 7 percent were single-unit trucks and 29 percent combo trucks in 2017, the most recent year for which data are available. These data indicate over 17 million equivalent single axle loads (ESALs) have been applied on the design lanes since 2012.

In late 2019, the result was pavement sections that featured an International Roughness Index (IRI) average of 50 and 52 inches per mile, which is smooth enough to result in ride quality bonuses for new construction in some states. IRI is combined with a Pavement Condition Rating to develop Pavement Quality Indices (PQI) of the sections. Oklahoma DOT determined the sections had PQIs of 96 and 94 out of 100.

“Since 2012, when the mix was put down, we’ve had no patching there,” said Brent Almquist, P.E., division 5 engineer, Oklahoma DOT. “The product has performed very well. We’ve had a historical problem with rutting in that area and we just wanted to get rid of the rutting and not have it come back. So it definitely has done a good job.” Previously, rutting on I-40 was dealt with in different ways. At one point, money was so tight that only the wheelpaths were filled with an “armor coat” placed by state maintenance forces. “CRS2S asphalt emulsion goes down, and then we put rock on top of that,” Almquist said. “That’s all we could afford at that time.”

Additional methods of pavement maintenance were tried out, but the rutting continued until 2011, when Oklahoma DOT let the HiMA rehabilitation project. 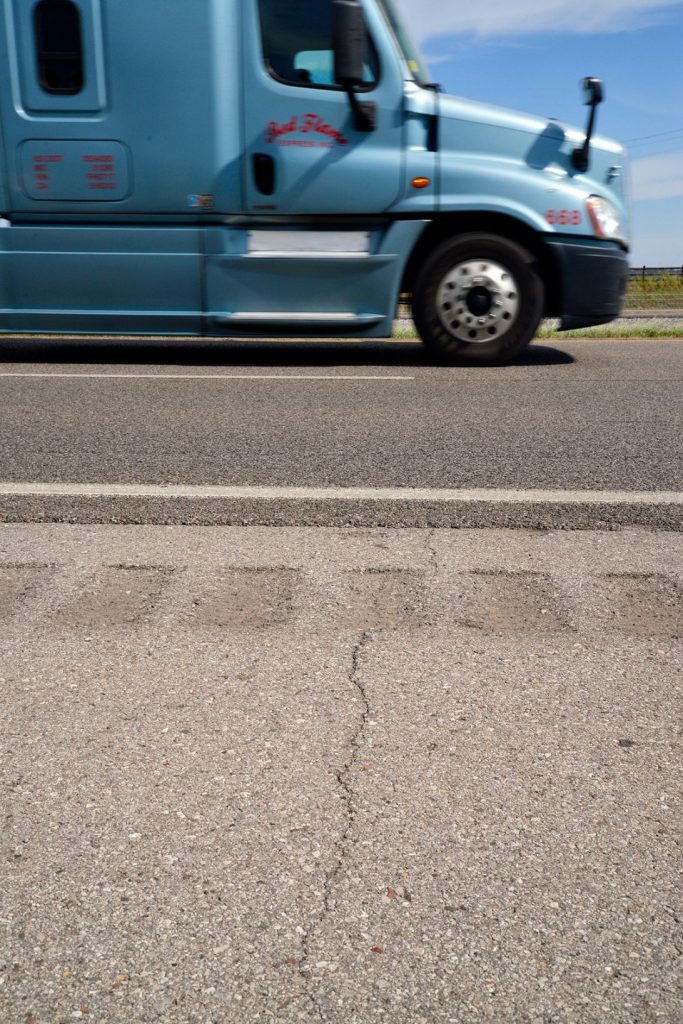 A transverse crack halts at the interface with 8-inch HiMA-modified pavement structure.

“The product has held up well, especially considering the history of rutting and other issues we’ve had with that section,” said Matt Romero, P.E., materials division engineer, Oklahoma DOT. “The HiMA modifier helped us come in with a thinner design to fix the ruts while saving on material costs.

“Things are changing across the materials department,” Romero added. “We’ve been trying different things. We’re looking at the balanced mix designs for enhanced performance, so HiMA is coming into play.”

The I-40 HiMA design reflects a perpetual pavement design that’s a deep section in which base and intermediate courses are developed to resist bottom-up fatigue cracking.

As a pavement bends under loads, the maximum tensile stress will occur in the bottom lifts, and resulting cracks at the bottom can migrate upward to become fatigue cracking at the top. If more polymer modified asphalt can enhance the lower layers, it provides an opportunity to “heal” the bottom lift and not propagate or initiate a crack there.

The I-40 HiMA concept was based on experience from the Oklahoma test sections in the 2009-2012 cycle of the National Center for Asphalt Technology (NCAT) test track in Alabama, in which HiMA was recommended as a repair option for failed test sections. For this project, back in 2012, 5 inches of existing asphalt was milled from I-40. On the milled, cleaned and tacked surface, a single 1.5-inch HiMA-rich bottom layer of 3/8-inch NMAS was placed. It was followed by two 2.5-inch lifts of Oklahoma S3 base course, a HiMA-modified lift with 3/4-inch NMAS gradation with 100 percent passing the 1-inch screen.

These were topped with one 1.5-inch lift of Oklahoma S5, a HiMA mix with 3/8-inch NMAS gradation with 100 percent passing the half-inch screen. All of these HiMA lifts were topped with a 0.75-inch open-graded friction course (OGFC), which is dubbed a “popcorn” mix in Oklahoma, containing PG76-28 OK asphalt binder, but no HiMA.

SBS polymer modifiers have been known to benefit asphalt mixes by adding a “rubbery” component that enhances resiliency and resists rutting, but there is a practical limit to SBS polymer concentration. Typically, when conventional polymer concentration exceeds 3 percent, the binder viscosity increases such that the mix becomes more difficult to produce in the plant and less workable for the paving crew.

However, the unique polymer used in the Oklahoma I-40 PG76-28 E binder was Kraton™ D0243, an SBS product manufactured by Kraton Corporation, Houston. The product is designed to be used in significantly larger amounts than conventional polymer modifiers—up to 7.5 to 8 percent while retaining workability. The result is a more durable pavement, standing up to truck traffic while permitting thinner sections, as evidenced by this project.

Today, Oklahoma is not using the full dosage of HiMA modifier in its mixes. “They’re using what could be called HiMA-light, not the full complete rubbery material,” said Bob Kluttz, senior scientist, research and development at Kraton. “However, that’s still more highly modified than typical materials with Superpave specs, and still used for durability.” A typical, conventional SBS-modified mix would contain 2.7 to 4 percent SBS modifier. A full implementation of HiMA modifier would be in the 7.5 to 8 percent range. “Oklahoma’s PG76-28 OK binder has 5 to 5.5 percent HiMA, so it’s an intermediate application,” Kluttz said. “But they are still improving the binder well beyond Superpave specs for that region—and improving performance.”

“Oklahoma I-40 has turned out to be an exceptionally durable pavement,” Kluttz said. “It is very much both rut-resistant and crack-resistant, and that’s unique.

Essentially, by using HiMA, Oklahoma built a pavement that has remained rut-free since 2012, using 8 inches, compared to 12 to 14 inches of conventional design, Kluttz said. “You can build a thinner pavement using HiMA and get as good or better performance, or fix a problem that you simply can’t solve another way,” he said. “And it still will be a thick, perpetual pavement. It’ll be a more expensive pavement because it’s incorporating a more expensive binder, but it will last substantially longer, and life cycle costs can be very much improved.”

With these applications, HiMA is finding more approbation in the Sooner State. “With a good seven years here on I-40, and the fresh project going in the northeast, I will start singing its praises,” said Kevin Suiter, asphalt branch manager for Oklahoma DOT. “I can’t tell you that it’s going to take off or go further. But now we’ve got some long-term experience. At the demo in the northeast, we can start saying, ‘Okay, guys, look at this. Here’s an alternative to what you’re doing.’ I go out and they said, ‘Kevin, we’ve got a problem.’ I tell them, ‘Go ahead and look what we’ve done, and this is how HiMA performed for seven years.’”