A regional college town, Burlington is home to the University of Vermont and Champlain College, functions as the seat of Chittenden County, and serves as a major historic and cultural center for the Green Mountain State. As the most populous city on Lake Champlain, Burlington is also the repose for 295 streets that are maintained by the city’s Department of Public Works, headed by Chapin Spencer.

DPW’s Maintenance Division is responsible for performing some of the more obvious tasks of the Department such as installing and maintaining nearly 130 miles of sidewalks, and maintaining the 95 centerline miles of streets. The latter includes crucial services such as street sweeping, pothole patching, painting road lines and crosswalks, and most importantly, protecting and preserving the pavements of those streets. A full-lane-width application of Delta Mist is performed on one of several streets fog sealed by the contractor indus. The crew used a Ford 750 Super Duty truck mounted with a 2,000-gallon Etnyre tanker to spray the product at ambient temperatures.

VTrans and the state share the responsibility and cost of maintenance, repair and replacement of Class 1 and 4 roads, but the lion’s share of responsibility and related costs for Class 2 and 3, which together amount to 90 percent of all travelled miles, are borne primarily by the City.

Class 2 town highways are the most important highways in Burlington. As far as practicable these secure trunk lines of improved highways from town to town and to places that have more than normal amount of traffic.

Class 3 town highways have simple, clear-cut minimum standards: They have to be “negotiable under normal conditions all seasons of the year by a standard manufactured pleasure car. This would include but not be limited to sufficient surface and base, adequate drainage, and sufficient width capable to provide winter maintenance…”

Until recent years, Burlington has relied heavily on an annual Street Reconstruction Program to keep its Class 3 streets up to standards. Work under the program typically occurs between April and November. Mailings are sent out to property owners to inform them where paving will take place. For example, the 2020 program called for milling and filling five streets. This involves removing the top course of pavement and applying a new top course to the road.

In addition, three streets were slated to undergo pavement patching whereby work crews fill and repair localized voids and address other pavement distress in the roadway with hot mix asphalt. The penetrating asphalt rejuvenator fog seal was applied by indus of Braintree, Massachusetts. Formerly known as Sealcoating Inc., the company has been applying various types of pavement seals and other pavement preservation treatments for about 60 years. Typically, fog seals have involved applying a light application of slow-setting asphalt emulsion diluted with water and without the addition of any aggregate. If applied in time, fog seals have been shown to renew aged asphalt surfaces by sealing small cracks and surface voids, coating surface aggregate particles, and even adjusting the quality of binder in newly applied chip seal.

By doing so they can preserve the functional integrity of the pavement and delay a more costly rehabilitation treatment in the near future.

More advanced fog seals contain asphalt rejuvenators to boost the penetration of the treatment into the asphalt pavement. The rejuvenators may be petroleum or bio-based products. 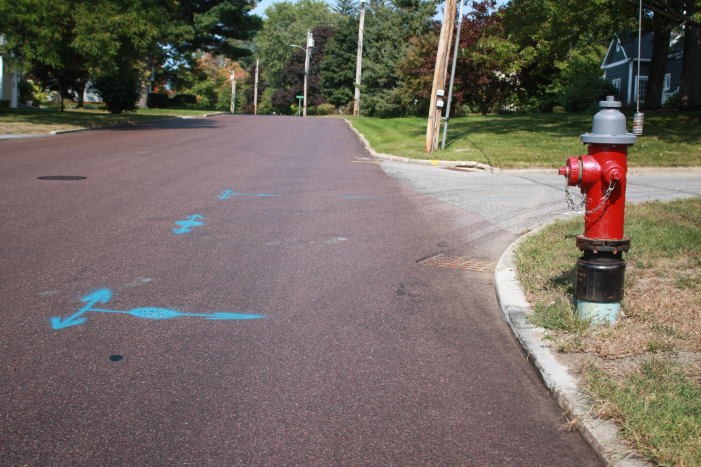 The treatment applied by indus to three selected Burlington streets was a fog seal using Delta Mist, a penetrating asphalt rejuvenator. The topically applied treatment was created with organic plant-based Delta S rejuvenator technology developed by Dr. John Warner and a staff of research scientists at the Warner Babcock Institute for Green Chemistry (WBI). Delta Mist is manufactured, marketed and sold by Collaborative Aggregates LLC of Lowell, Massachusetts, as an emulsified version of Delta S that is spray-applied at ambient temperatures.

Formulated with “green” or sustainable technology, the product is designed to protect the environment while increasing pavement life by restoring oxidized asphalt and reducing loss of fines and aggregates. It also improves cohesion while retarding crack propagation of the pavement surface. According to the manufacturer, with proper pavement surface preparation and application rate, Delta Mist slows the asphalt oxidation process for up to three years or more with each application.

Burlington has invested many millions of dollars in its road system—100 percent of its 95 miles of travelled roads have asphalt pavement. There are no gravel or dirt roads. This compares favorably with Vermont overall. According to VTrans, about 45 percent of the state’s 15,800 miles of roads are paved, while 38 percent are gravel, and the remaining 17 percent consist of graded earth, unimproved or primitive, and untraveled roads.

The City is interested in protecting its sizeable investment in roads—one of the reasons it is testing the effectiveness of rejuvenating fog seal, according to Art Baker, regional manager for indus.

“They were concerned about raveling of some asphalt pavements soon after they were installed,” Baker said. “There was very little or no asphalt coating of the fine aggregate taking place. They were also interested in pavement preservation treatments that could extend the life of pavements with the added benefits of cost savings while utilizing sustainable technology.”

Baker has been working with City personnel to investigate possible preservation treatments for their pavement management program. A strong proponent of pavement preservation, he has a 25-year background in municipal infrastructure installation, maintenance and repair. With a Bachelor’s degree in civil engineering, he started out in the private sector, then switched to the public sector and served as Public Works Director in Connecticut and Massachusetts and later returned to private industry when he joined indus. As regional manager for the company, he has been counseling DPW pavement managers in cities and towns in western Massachusetts, Connecticut, Vermont and southwest New Hampshire. Baker oversaw the recent application of Delta Mist on several residential streets in Burlington: Birch Court and Cayuga Court in northern Burlington, and Crescent Road in the southeast corner of the city.

“The pavements on those streets were three to six years old,” he said. “We were interested in the depth of penetration of the rejuvenator into the pavement. According to tests at NCAT [National Center for Asphalt Technology], the optimum depth of penetration for a rejuvenator would be about 3/8th of an inch. And we also wanted to see if the treatment would reverse the problem they were having with raveling.”

The indus crew used a Ford 750 Super Duty truck mounted with a 2,000-gallon Etnyre tanker to spray Delta Mist at ambient temperatures on the roads. They applied between 0.08 and 0.1 gallons per square yard of the penetrating rejuvenator over the streets—the application rate was varied to address the mixed existing pavement conditions in some areas. Overall, approximately 14,500 square yards of pavement received the treatment. The treated streets each opened to traffic within about one hour of application.

Baker said the streets receiving the Delta Mist treatment would be checked periodically to see the long term results of the applications. But one benefit was obvious almost immediately.

“We didn’t have to cover manholes or drain inlets before the applications. When we first sprayed the seal, it was a milky white color. When it dried it turned transparent. So at any traffic markings like crosswalks, the pavement and markings returned to their natural color, and no curbs had to be cleaned,” Baker said.